Segmented turning allows me to combine my engineering skills, woodworking skills, and woodturning skills.  Missing segment is a process which adds in negative space to the turning.  These pieces can be very time consuming to create, taking anywhere from 1 week to 6 months to make.  In 2012 I demonstrated the Missing Segment process at the SJ AAW symposium.  Since then, I’ve seen a number of turners world wide trying their hand at it.  Knowing I’ve influenced turners around the world makes me smile.  If you are one of those turners, please share your pictures with me! 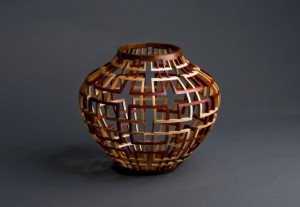 Chained Ambition:  This piece was my 3rd attempt at the Missing Segment process.  The pieces is roughly 12″ in diameter, and was made from 3 different kinds of wood.  The pieces are ~1/8″ thick.  When I first designed this piece, I had just had one of my many knee surgeries.  I spent roughly a week getting it the way I like, then put it away.  My first impression was it was impossible to make.  Far to fragile to ever survive.  My wife then spent 3 months convincing me that it was only wood, and to try it.  6 months later, you see the end product.  What surprised me was how strong the piece really is. 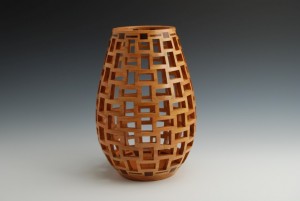 911 Tribute:  I made this as a tribute to the world trade center.  Originally it started as 2 pieces, but the second piece did not survive.  The negativespace is intended to represent the windows, and it was intended to look as if it was sagging.  I made the piece from bloodwood, which I hoped would look like it was on fire.  Unfortunately, the color isn’t as bright as I had hoped. 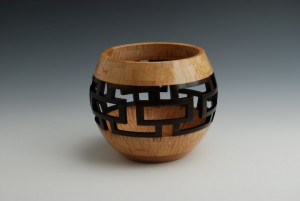 This is a piece made from Zircote and Curly Maple.  The negative space is not overwhelming, but a part of the turning.